Due to access restrictions in place as a precautionary measure while we undertake high level masonry inspections, there is currently no visitor access to the castle or doocoot.

The gardens, exhibition and shop are open.

One of the historic gems of East Lothian, medieval Dirleton Castle and its famous gardens are among the most visually spectacular estates in Central Scotland. Remarkably well-preserved despite its turbulent past, the Castle is within easy reach of Edinburgh and is guaranteed to appeal to historians, photographers and botanists alike. Dirleton has an undeniably menacing air. With its grim dungeons, evocative drawbridge and crumbling walls it has an atmosphere that few can match. The same goes for its history where good times and bad have left their mark on what remains. Dating back to the 13th century, it was for 400 years a magnificent fortified residence to three successive noble families the de Vauxs, Haliburtons and Ruthvens. During this period, it suffered and changed hands several times throughout the Wars of Independence but was generally undergoing constant improvement as extensions, repairs and impressive new gardens underlined its status as a lordly residence. That was until 1650 when Oliver Cromwell laid siege and his forces decimated much of the castle as even going so far as to hang numerous defenders from the castle walls in a typically chilling warning. Dirleton's status as a military fortress ended there. However, the Nisbet family bought the estate in the 1660s and used the magnificent ruins as a feature in their new designed landscape.

The stunning and vast gardens on site today date back largely to the late 1800s and early 1900s and include a rare ginkgo, or maidenhair tree, which is a species that has gone unchanged since the time of the dinosaurs. A fascinatingly robust plant thought to have its origins in China, they have proved largely resistant to pollution and even survived the radioactive effect of the Hiroshima blast.

Dirleton Castle can be found in the centre of the village of Dirleton, 2miles west of North Berwick, and is open year-round to visitors. Please visit our website for opening times, access information and prices.

The gardens, exhibition and shop are open.

We recommend booking online in advance to guarantee entry. 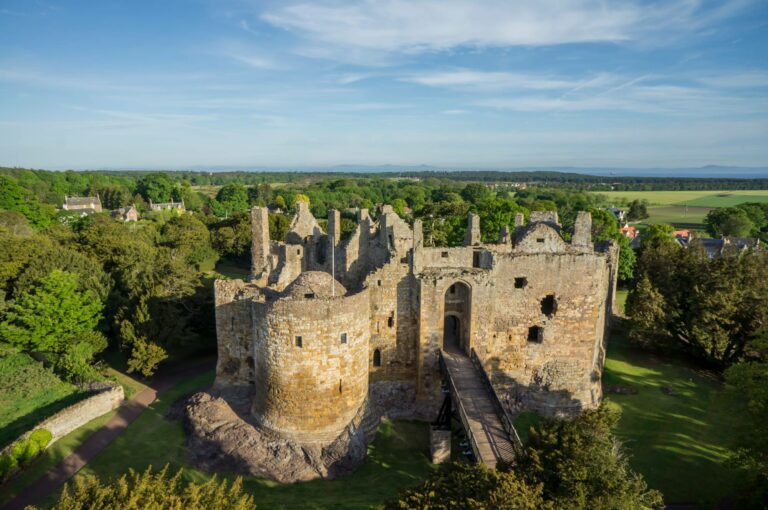 Sorry, no records were found. Please adjust your search criteria and try again.

Send a message to Dirleton Castle

Claim this listing as your own. We will email you after receiving your application.
You must login to claim, please login first.